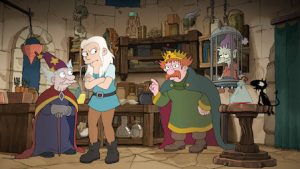 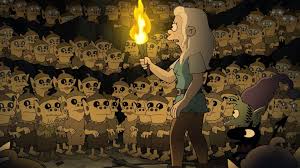 The series opens where we last saw the characters, and we find them all in a bid to escape their current predicaments. Bean, voiced by Abbi Jacobson, is being forced by Dagmar to wed a mysterious new character. In total “Bean” fashion, she’s vehemently against the idea but struggles to find a way out of the situation. Luci is dead and comically tries to convene a plot out of heaven. Elfo is captured by ogres, who are determined to feed him to their queen, Grogda. Meanwhile King Zog is institutionalized with Chazzzzz and has lost his sense of identity and will to fight.

Bean and her unstoppable sidekicks battle against treacherous villains, including her mother Queen Dagmar, a narcissistic, overbearing woman, Freckles, a sentient, foul-mouthed wooden puppet who is hell-bent on undermining the monarchy, the elves, who because of a irrevocable heinous event, absolutely despise the humans. And Trogs, a mysterious species living under the sea whose origins bring about a pleasant surprise. 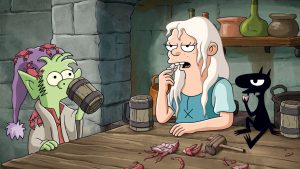 The bond between Bean, Elfo, and Luci is delightfully entertaining, and they each reflect the “badass” trope. Their desire to protect each other, well Bean for the most part, is what makes the story heartwarming. After Luci reveals to Bean that Elfo has been captured by the Trogs she proclaims “we gotta save Elfo”. And after Bean compliments Luci for helping to save Elfo, in his weird, twisted way he accepts the recognition saying, “Just this once. Next time, Elfo dies.” The dynamic trio compliment each other’s personality, Bean – headstrong and cunning, Luci – cynical and brutally honest, and Elfo – naive and foolhardy.

The story hints at the arbitrary social hierarchies within the realm of Dreamland, which includes mermaids, Trogs, elves, ogres, etc. where humans deem themselves far superior. It’s an interesting story arc that leads Bean to struggle with her own identity and position, when she discovers the truth about Dreamland, and her royal status. Bean’s sexuality is also expertly explored throughout the series, as she finally admits to her father about having feelings for Mora, a mermaid. The moment is handled tenderly by King Zog, with no judgment and his own admittance of having once loved a mermaid, thus making Bean’s feelings completely natural and valid. Telling her that “love is always risky” and that she should take her own advice and “don’t let fear get in the way of happiness”.

The tale is not without its criticism. At one point, to keep up with the amount of characters and subplots becomes a bit overwhelming. It detracts from the overall cohesiveness of the story, however this could be a marketing ploy to open the door for spin-offs.  Disenchantment Part 4 is an entertaining story with fun, exciting visuals and compelling great intriguing characters. The feisty Queen Bean whose identity becomes unhinged navigates familial, platonic and romantic relationships seamlessly.

Season 4 of Disenchantment will be released on Netflix Feb 9th 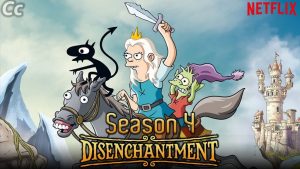