He-Man is back and we love it! – An Early Netflix Review

In an era where television reboots simply don’t make “the cut” and iconic stories of our favorite heroes are poorly retold, Netflix’s re-installment of Mattel’s Masters of the Universe does the complete opposite.

Popularly known as “He-man” since the 1980’s, the show was initially created by Mattel and Lou Scheimer, who also served as Executive Producer of the animated series.  The story is a dark, yet thrilling adventure into Eternia, land of light and chaos ruled by King Randor and Queen Marlena.  It’s currently caught between the opposing forces of Castle Grayskull and Snake Mountain. 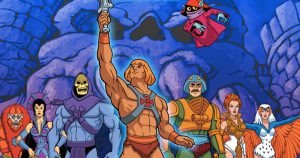 Skeletor, the demon lord is persistent in his attempt to conquer Castle Grayskull, but is thwarted endlessly by He-man, otherwise known as “Master of the Universe” and the current champion of Eternia who presently wields the sword of power.  American filmmaker Kevin Smith, notable for comedy film Clerks retells this timely animation alongside Producer Susan Corbin (Mattel), known for her contribution in the Barbie franchise.

The rich storyline is rebuilt, re-penned and stirred by Marc Bernardin, Eric Carrasco (Supergirl) and Tim Sheridan (Reign of the Supermen) in a brilliant, medieval world of sorcery and high-tech evolution. The story picks up from where the characters left off years ago, focusing on the soon-to-be fractured guardians of Castle Grayskull.

After a battle between He-Man and Skeletor turns tragic, this leaves Teela, Captain of the Royal Guard, and King Randor oblivious to the warrior’s true identity as Prince Adam.  Teela revokes her title as newly appointed Man-at-arms after her trust and loyalty in the royal court is shattered. And she leaves to discover her own path as a hero, thereby dissolving the Band of Guardians. 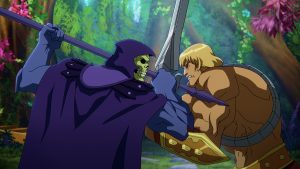 In a CG animated still from Masters of the Universe: Revelation, Skeletor (left), who wears a purple cloak and hood over his skull, grips his spear in a battle against He-Man (right), a strong shirtless blonde male with a golden armored belt and wrist plates holding a silver sword. The two are standing face to face in a forest with bright foliage.

In comparison to the original ’80’s masterpiece, Powerhouse Animation, the masterminds behind the Castlevania franchise, animate the Netflix series in their signature jaw-dropping style: accentuating details, luster and sharpness with a smooth blend of CGI.

The five episode series follows Teela on her adventure towards self-discovery, heroism, attempt to earn a living wage and her budding relationship with Andra, a tech-inclined young girl who she befriends on her journey before she is forced to deal with her buried past.

The voice actors for the reboot features an all star lineup led by Mark Hamill (Skeletor) from Star Wars and Chris Wood (He-Man/Prince Adam) of The Vampire Diaries.  Unfortunately, majority of Hamill’s lines are cringe and cliché in contrast to the sassy and foul mouthed front of the beloved 1980’s character.

Fans of the original show fell in love with the snarky, relentless villain with his penchant for smart mouthed comebacks and curses, usually aimed at his lackeys. And the revamped Skeletor, however dark and thrilling he may be, pales in comparison to the former in terms of character depth and authenticity. 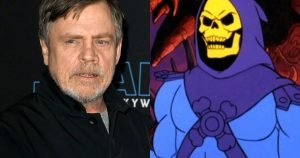 And the reboot’s brilliant soundtrack, Revelation, was arranged by Bear McCreary whose notable works include Marvel’s Agents of Shield  and The Walking Dead . The adult themes and images are heightened, directly correlating the visuals and storyline surrounding war, loss, grief, power dynamics, friendship  and death.

Fans of the franchise are in for a spellbinding adventure, as Netflix manages to retain key and delicate aesthetics such as He-Man’s official battle armor; made even more sleek and appealing by Powerhouse Animation.

The series displays an impeccable balance at retaining the show’s nostalgic roots while the modern animation style enhances the viewing experience.  Courtesy of Netflix, this more adult version of Masters of the Universe find a lot at stake for Eternia, as its citizens are at the mercy of the powerful Skeletor. 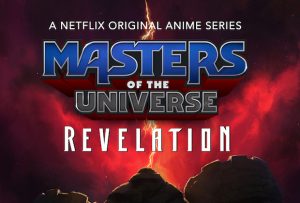 Elvis Antai Daniel is a writer for VORTEX’s Editorial Team.  He has a passion for the arts, script writing, music, illustration and animation, theatre and film.

What do you think of the new “Masters of the Universe” ?  Be sure to share your thoughts below!