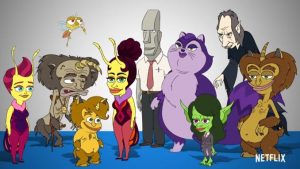 Think of Disney’s ‘Inside Out’ only this time visualize the ” voices inside your head” as living and breathing, visible forms assigned to each and every human.  Think of Disney’s “inside out” once more. This time with emotions and feelings that are more adult-esque such as depression, shame, love and lust.  Netflix’s “Big mouth” spin-off, Human Resources is based off it’s predecessor, only more focused on the creatures, their relationships with their “human clients” and inevitably one another. In Human resources, creatures such as love bugs, hormone monsters and the lot are assigned to humans to aid them throughout their journeys In life. 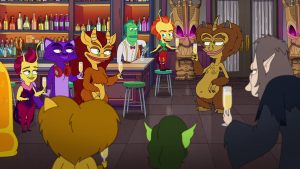 Human Resources has Big Mouth’s creators and co-producers, Kelly Galuska, Nick Kroll, Andrew Goldberg, Jennifer Flackett and Mark Levin serving as writers and producers on the project. While the themes of sex, substance, and the use of graphic images is really not alien to both shows, Human resources takes it a little bit further. When love bug Sonya is fired from corporate, slacker love bug Emmy has her big shoes to fill.  For once, Emmy has to take on responsibility and slowly learn what it is to be a lovebug, alongside her human client, Becca. This she does while she discovers herself and defines her relationship with the rest of the creatures. While Emmy might have been portrayed as the main protagonist, the show also bounces off the lives of other creatures such as Rochelle, the logic Rock, Maury and the shame wizard. 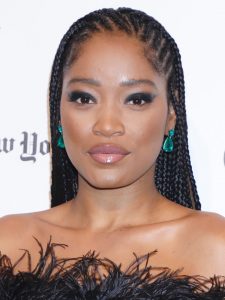 Human resources has an all-star soundtrack and cast lineup. From Janelle Monáe’s vocals gracing the theme song to Randall Park (Ant man), David Thwellis (Harry Potter), Keke Palmer (Joyful noise) and Rosie Perez (The road to El dorado) voicing some of the main characters, it’ll have a second reason to rise up the popularity charts. (The first being it tied to the already successful ‘Big mouth’.)

Human resources is an adult animation laced with colour, vulgarity, and supposed comedic undertones. The over-sexualization of the show however diverts the attention of the viewers from the many comedic and creativity the show brings. The fact that there is hardly a scene without perverse dialogue or sexual advances on the part of the creatures is frankly disturbing as it makes the characters all seem like sexed-up freaks with insane libidos and frankly, what was meant to be a comedic sitcom unravels into one of these very much disappointing, over sexualized shows we keep getting these days.

Even with the show’s rich story line and wild creativity, it’s star studded lineup and cultural references– key elements that make a show standout, Human Resources really stands out instead as one of those shows that would be forgotten in the sands of time. Specifically because even though the show manages to keep most viewers glued to its rich references and
sexual sceneries, the forth coming years wouldn’t be so nice to it because that aside, the show really passes as empty. 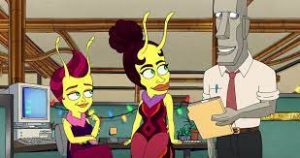 There’s really no focal drive of the monsters, even their “human clients” don’t drive them enough most times. The subtle highlights that could be gotten however are of course drowned out by nothing but the repetitive sexual dialogues or constant intercourse on the side of characters.  Human Resources also flashes undertones of incest and bestiality as seen in a sexual craving of a monster with his mother and a ghost’s affair with a cat. This obscene sexual practices would in no little way stir negative criticism as the show poses to somehow want to outdo itself.  While watching the series it provides viewers with its nostalgic ‘Family Guy’ and ‘American Dad’ effects, animators and producers of the show obviously did not know where to draw their lines. It’s frankly disturbing watching adult animation unfold into nothing else but shallow and porn-esque.

Human Resources holds no boundaries when it comes to references. From pop culture to literature, even to God, for the religious viewing quota, it quite berates and degrades the deity of their faith. In the quest for comedic relief, beliefs and faiths are now being secularized and no more held up out of religious tolerance and worldwide sensitivity.  With “adult animation” slowly being reduced to nothing more than perverted onscreen profanities, with zero central points, the future of animation in general raises a deep concern.  Human Resources holds so much potential for comedic relief and could take adult animation to a whole different level and still be one for the “books”. With its rich and diverse characters, out-of-the-box creativity, it’s addressing of real life issues, it could be a big win if it’s future seasons focuses more on the storyline –they seem to be less focused on, and not just overly emphasizing on the perverted sceneries and dialogues. 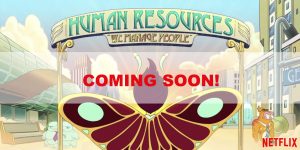