Netflix YASUKE review – The Tale of the Black Samurai

Yasuke, Netflix’s six-episode animation series follows the heroic tale of Japan’s legendary, first Black samurai.  Lakeith Stanfield, also an executive producer on the project, voices the titular character for the English version.  The highly anticipated series is spearheaded by LeSean Thomas, notable for working on projects such as Black Dynamite, Legend of Korra and The Boondocks.

The series commences amidst a chaotic battlefield.  Although set in the 16th century, futuristic gundam robots litter the frontline, alongside soldiers, archers and spellcasters.  Meanwhile, Yasuke watches helplessly as Oda Nobunaga, his daimyo, commits seppuku (suicide).  Two decades later, he is now a boatsman in a serene town and going by the name ‘Yassan’.  Although preoccupied with drinking and sulkiness he remains approachable to the villager’s kids.  Yasuke is soon pulled out of retirement when Ichika beseeches him to accompany her ill daughter Saki, troubled by uncontrollable magical abilities, to a notable doctor. 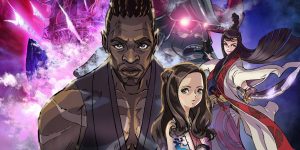 Yasuke battles against treacherous villains, including an eclectic ragtag group of bounty hunters – Haruto, a highly personable, sentient megabot; a shaman from Benin who can summon illusionary fighters; Nikita, a Russian werewolf woman; and Ishikawa, a whip scythe-wielding assassin.  These hunters, originally hired by a tyrannical Catholic priest to kidnap Saki, are arguably the most memorable part of the series, and eventually return to accompany Yasuke in the final battle.

The gradual bond between Yasuke and Saki is gratifying, despite adhering to the “badass and child duo” trope.  Their desire to protect each other is wholesome and innocent, “WE protect each other,” Saki proclaims.   The dynamic duo compliments each other’s personality, Saki – energetic and engaging, Yasuke – solemn and reserved.  His emotional and mental strain is eased by her childish demeanor.  She is introduced as timid and meek, cowering during the initial boat attack.  Yet Saki’s desire to protect her self-appointed guardian forces her to become a bold and formidable character, rescuing him repeatedly.

The story ferries between present day conflict and past events, which find him undergoing training at the Nobunaga’s dojo, befriending Natsumaru, the sole female samurai, and evidently struggle to assimilate into Japanese culture.  As a foreign-born warrior, Yasuke instantly regarded as an “outsider” and met with suspicion.  During combat, Mitsuhide, the ex-samurai general pontificates, “The black samurai.  You will always be a servant, no matter what armor you wear.”  This scene summarizes the warrior’s constant struggle of identity and perpetual life of servitude. 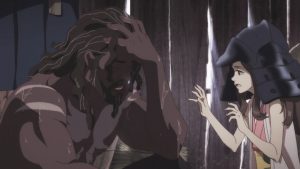 The tale of Yasuke, the Black samurai is a significant addition to anime and black culture narratives. Original storytelling and diversity in anime is becoming increasingly more common alongside the expansion of diversified media platforms.  In a recent interview with CBR, LeSean Thomas reveals, “… when you get to a space like streaming, where now your finances aren’t coming from advertisers and [are instead] coming from subscriptions, you now owe your viewer diversity. You owe them. They’re going to watch what they want to watch, and they want to see what they want to see — not just themselves, but other content from other cultures.”

The story highlights the racial undertones the samurai faced while living in Japan in 1579.  He often finds himself at the center of awe and curiosity.  A historical account depicted in the series shows Nobunaga’s entourage attempt to wash the “blackness” of Yasuke, after assuming his body was covered in ink.  Indicative of some of the many racial transgressions he had to endure, it makes his rise to Japanese elite status evermore celebratory. 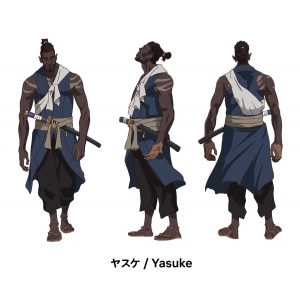 The tale is not without its criticism.  An exploration of Yasuke’s personal journey and discovery, exclusive of servitude, would have been enjoyable.  Instead, his performance and motivations are at the sole behest of other characters.  We don’t get a chance to witness adventures rooted in his personal ambition and obligations.

MAPPA is responsible for the amazing animation production.  The Japanese studio is responsible for an outstanding list of projects, such as the exceedingly popular Jujutsu Kaisen, and Attack on Titan (final season).  Poignant character designs by Takeshi Koike, world art designs by Minoru Nishida, and emboldened art direction by Junichi Higashi.  The fight sequences are sleek, sharp, and violent but not self-indulgent.  It avoids overtly gory details, which can certainly be quite a challenge with a feudal war backdrop.  Lush forests, tranquil natural scenery, battle scenes drenched in hues of violent and aquamarine make this an impeccable visual aesthetic. 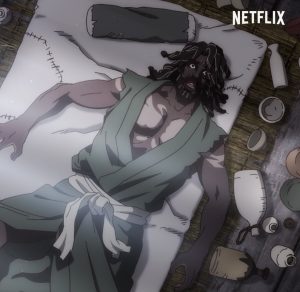 Flying Lotus, the critically acclaimed record producer and rapper was tasked with compiling the music.  The talented musician uses the score to chronicle Yasuke’s character progression in chronological order.  The opening track, “Black Gold” performed by American artist Thundercat is smooth, funky and layered with light, floaty vocals.  It provides a refreshingly distinctive tempo from the hip-hop music arrangements, typical for most black anime storylines.

Yasuke is a respectable story with alluring visuals and compelling music.  Be sure to stick around for the post-credit scene alluding towards the lone hero’s forthcoming journey.  The samurai warrior whose life is left largely a mystery is given an opportunity to enjoy a hero’s tale, even if only speculated.  The story reimagines Yasuke as a fully-fledged character, allowing him space to exist in his entirety, instead of merely as an historical footnote.

Netflix is poised to release Yasuke on April 29th.