Netflix’s ‘Centaurworld’ Takes You On A Colourful, Trippy Adventure – An Early Review 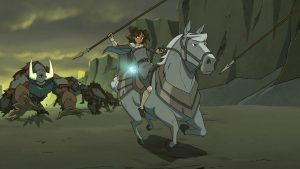 Netflixʻs latest offering, Centaurworld offers a glimpse into the wacky imaginative mind of creator and showrunner Megan Nicole Dong, notable for her directorial work in Pinky Malinky and the Sketch Shark comics. The colourful 10 episode animated musical comedy follows the misadventures of a war horse thrown into an outlandish, whimsical world of magical singing centaurs of all shapes and sizes.

The 2D children’s animation opens up in a war-torn world with two best friends, a war horse named Horse and her human rider, typically named Rider. The pair engages in an epic battle with a horde of Minotaurs which results with the two best friends being separated. The fate of Rider, who is voiced by Jessie Mueller, is left unknown as she watches Horse is plummet into a rift created by a magical key strapped around her neck. Thus begins the misadventures of Horse who is voiced by multiple Emmy Award winning actress Kimiko Glenn, as she struggles on the lam to return to the human world. 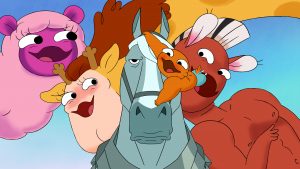 The shows goes on a tangent, popping up in the escapist fantasy world that is Centaurworld. Here, Horse stumbles upon a trippy land with dreamy, colourful creatures and landscapes, courtesy of art director Kimberly Knoll. The show takes a hard left turn with the introduction of The Herd, a comical misfit family of magical singing centaurs led by the ever so vigilant matriarch, Wammawink. The herd live in a literal magic bubble and is composed of Ched, the cynic who has an unresolved enmity for horses; Glendale, the quirky weirdo; Durpleton the over enthusiast and lastly, Zulius the narcissist

Horse sways the Herd to leave behind their monotonous lifestyle and join in this bizarre adventure down the colorful rainbow road and obtain the magical keys that will ultimately enable Horse to return home. The journey is not without its comical moments as the rag tag crew encounters talking farts, talking tails which tell bad jokes, quirky characters straight out of a standup comedy show and charismatic supporting characters such as Water Baby, a Hippotaur who guides them on their journey.

The story is well balanced between its humorous and emotional moments with the once self centered Horse growing a close bond with The Herd. This now extended family bands together, singing and working their way past antagonists such as the artistic but temperamental Beartaur. As well as Taurnado, a malevolent combination of centaur and tornado which consumes all in its path.

Ched is a standout character. Voiced by Chris Diamantopoulos, notable for voicing the titular character in Mickey Mouse, Ched grows to resolve his hatred for horses, however Horse begins to grow discouraged with each passing day as with each key obtained, the magic of Centaurworld slowly transforms her into a centaur, and her memory of Rider slowly fades. 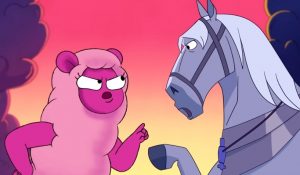 Centaurworld is a children’s animation but parents can enjoy its nuanced juvenile humor and sarcasm . With the inclusion of enigmatic characters such as Comfortable Doug, a naked moletaur prison guard, hell bent on serving justice. The shy Gebbrey, a comically misunderstood treetaur who just happens to present in every situation to add comic relief, the show is a fun watch for the entire family.

With its psychedelic animation style and splashy colors, the show is easily addictive, compounded by the support of the eccentric character design team of Evan Palmer and Jennifer R Goldberg. Sporting voice talent from Parvesh Cheena, Josh Radnor, Megan Hilty, Kimiko Glenn, Megan Nicole Dong and Jessie Mueller, the animation delivers on fantastical, yet realistic personalities. Megan Hilty voicing Wammawink aces her supporting role with her alluring voice and her charming personality which younger viewers will instantly grow to love. 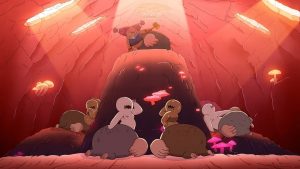 Centaurworld makes a worthwhile effort to entertain as well as educate on diversity, coexistence, teamwork and surprisingly puberty. Acted out through musical performances , hilarious hijinks and comedic timing, the characters, all of varying species, band together to aid Horse, a strange outsider, to return home.

In her misadventure, Horse becomes a wholesome character. Her evolution takes the once pushy, self-centered personality into a space where she begins to explore deeper emotional and mental states in order to better cope in the strange environment. And The Herd learns to embrace the endless possibilities that exist in the world waiting to be explored.

Toby Chu, the music composer for the Oscar winning short film Bao scores original music for this comedy. The relatable, tongue-in-cheek songs written by Megan Nicole Dong and Dominic Bisignano complement the emotional ambivalent yet benign tone of the showThe project is produced by the outstanding Mercury Filmworks which is responsible for popular children’s animations such as The Lion Guard, Mickey Mouse and Jake and The Neverland Pirates. Megan Nicole Dong serves as the executive producer alongside Dominic Bisignano. 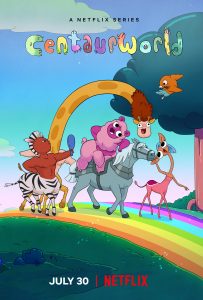 Centaurworld is set for release on Netflix on July 30th, 2021

What did you think about Centaurworld? Share your thoughts below!