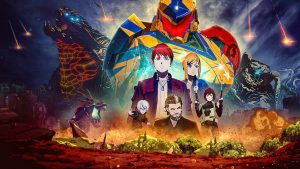 Compelling, tear jerking, grittier! The stakes are higher and the finish line is close yet so far away as the desperate trek in the alien ravaged Australian outback resumes.

Sliding onto Netflix for a second and final season is the colossal Jaeger vs kaiju 3D anime flick, giant robots vs monsters for the unversed. This animated series stands as an extension of the live action Pacific Rim universe created by Guillermo del Toro and Travis Beacham. The story folds as we join siblings Hayley and Taylor and their co-pilot Mei as they make a run for Sydney in hopes of finding their parents. Threatening to derail their progress is the mysterious fate of their child companion, bOy, which takes them on a much dreaded detour. Battle and great sacrifice are the only means of survival in the Black.

As teased in the trailer, this no holds barred seven episode journey is coming to a close as the story shifts it’s primary focus from the Jaeger Atlas Destroyer, and orbits around the enigmatic human-kaiju hybrid, bOy as the cultist group; Sisters of the Kaiju stalk the child with the goal of making him ascend as the Kaiju Messiah as well as dispatch the siblings and Mei with extreme prejudice.

Pacific Rim: The Black is developed by show runners and co-creators Greg Johnson and Craig Kyle who have a history of writing animated adventures. Kyle is a regular at Marvel, writing for Fantastic Four: World’s Greatest Heroes and co-writing the live action mega-blockbuster Thor: Ragnarok. And Johnson is no stranger to robot animated flicks, having written Transformers: Rescue Bots and Marvel’s X-Men Evolution. These experienced writers bring us a gripping tale of resilience and redemption with a steadily paced plot that isn’t heavily reliant on the gritty MMA styled colossal clashes between the Jaeger and the menacing Kaiju. 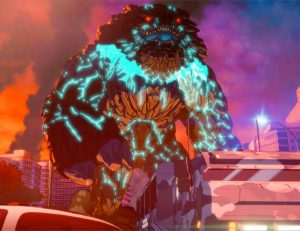 Without a shadow of a doubt, the most attractive part of the show is the 3D animation stylized with 2D aesthetics. A style which Japanese based animation production house, Polygon Pictures is well versed.  Having produced similarly styled projects such as Netflix’s Knights of Sidonia and the Godzilla anime trilogy. The animation aesthetic brings a rugged, grounded feel to the clunky giant robots and monstrous aliens battling it out in the outback, an element taken right out of Del Toro’s play book in the original 2013 film. The animation team does an excellent job bringing out a gritty, yet evocative mise-en-scène with an beautiful a splash of color, vibrant characters, beautifully rendered and striking visuals to propel the plot.

Directors Hiroyuki Hayashi and Jae-hong Kim borrow from the 2013 live action aesthetic of having night battles and scenes, which serve to create a sense of dread and spotlight the magnificent and destructive Kaiju battles, as Atlas stumbles into the Jaeger graveyard creating a compounding sense of impending doom. 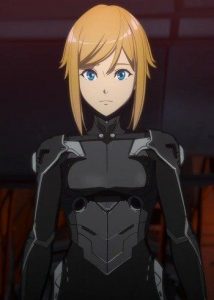 Season 2 explores the Kaiju ecosystem, with the introduction of variants of the same species, such as the infamous Mutavore, which was responsible for destroying the wall of life during the Kaiju invasion. We dive deep into Kaiju territory and fans can expect climatic battles with hordes of new Kaiju.  Balancing out the action are the family dynamics and bickering and bonds amongst the siblings: Taylor, Hayley and Mei giving realistic human perspective in this Kaiju infested environment.

The trio are at odds over their differing ideologies and regarding the fate of bOy, whom Hayley has created a filial bond with, due to her fear of abandonment.  With the revelation of bOy as the Kaiju Messiah, his very existence poses a threat to his protectors as the purpose of his creation was to eradicate mankind.  A purpose that the Sisters of the Kaiju seek to fulfill. An inevitable, climatic showdown between Atlas Destroyer and bOy is on the cards as his very nature is to destroy and rend the machinations of men.Hayley, voiced by Gideon Adlon is the heart of the journey as her emotionally-driven outlook on life shows that one can still retain their humanity even when everything is falling apart. Hope is not gone, it’s just lost and needs to be found.

Taylor on the other hand, voiced by Calum Worthy, is a sharp contrast from Hayley as he’s relatable, selfish, logical and driven by the “greater good” theory – the theory that the needs of the many outweigh the needs of the few.  In this case, “the few” is  bOy.  Then there’s Mei, the teenage assassin on a quest to find her family, but ends up tagging alongside the siblings and piloting the Jaeger Atlas Destroyer. LOA, the trusty training Ai guides the crew on the Trek in deep Kaiju territory offering a new outlook on the entire experience and some insight into her backstory. LOA is voiced by Erica Lindbeck. 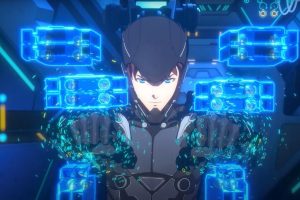 Switching from the previous season’s all too familiar portrayal of humanity as a vile species and the biggest threat to it’s own collective existence, season 2 instead treads on a path of salvation, and redemption.  Characters like Shane, who is hot on Atlas Destroyer’s trail, is on a quest to reclaim his child prodigy Mei. Shane is a major indicator that humans can be more than the sum of their actions, they can be symbols of defiance towards the darkness that seeks to consume them, even when faced with daunting odds.  The second and final season of Pacific Rim: The Black provides fascinating battles, tear jerking moments and a compelling plot to offer a conclusive end to the great trek across the Australian outback, leaving gripping moments that will have their dedicated fans in tears.

Pacific Rim: The Black season 2 is produced for Netflix by Legendary Television and will be available for streaming on the 19th of April. 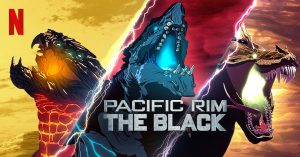