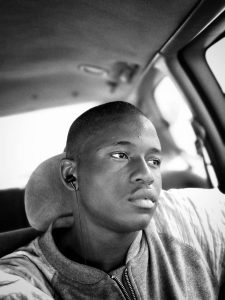 WHAT WAS THE MAIN INSPIRATION BEHIND FOLKTALES?

The main inspiration behind folktales is the idea of the history of African myths and legends we all heard about while growing up. There’s a lot of untold stories, untouched source material. Vortex CEO. Mr Somto Ajuluchukwu told me about the idea for the comic, and I was hooked instantly. It was an amazing experience. 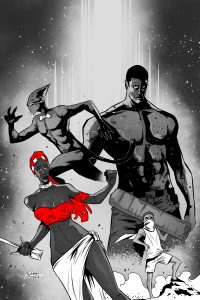 IT LEANS HEAVILY ON MYTHOLOGY AND MYSTICAL FIGURES.   ARE THE ASIIRI BASED ON A PARTICULAR MYTHOLOGY?

The Asiri are based on a combination of multiple mythological stories of certain legendary figures like Madam koi koi, and some of them are based on some real life occurrences and happenings around. Like the sex for marks idea which turned nine lives into a cat. At some universities, the “sex for marks” thing is pretty rampant. A family friend of mine once told me about a cat that was seen, reading at the school library, the pictures were online, they were viral.

ALSO, THE CHOICE TO INCLUDE BIBLICAL ANGELS WAS QUITE INTERESTING. DEFINITELY SHOCKED ME. DID
YOU HAVE A REASON WHY YOU CHOSE THEM IN PARTICULAR?

Angels are pretty unique and powerful, I’ve read about them in the Bible and they seem
pretty interesting

THE COMIC IS QUITE GRAPHIC IN NATURE. WERE YOU CONCERNED ABOUT HOW THE AUDIENCE MIGHT PERCEIVE IT?

About that, I wasn’t really concerned, because the graphic nature of the comic helps deliver the story, and is quite essential in moving the story forward, it’s a rated R kind of story 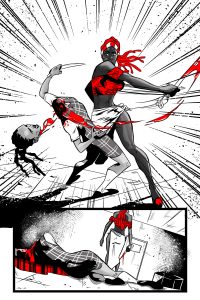 THE CHARACTERS ARE QUITE CAPTIVATING. THEIR INTERACTIONS ARE ORGANIC AND FEEL REALISTIC. HOW DID YOU GO ABOUT CREATING THEM?

Okay, I’ll start with nine lives, he was inspired by the sex for marks scandal, and the cat at the library, I mentioned that before. Madam koi koi, she’s a pretty mysterious figure and there’s a different versions of her story, but I stuck to the one I was most familiar with. For black man, I once
heard about burglars with black shiny oiled up skin, they break into a house at night, and steal, but when you grab hold of them, they simply slip off your hands due to their oily skin. For Bush baby, his story is quite complex, but I’ve always imagined him as a child who got lost and could not find his way back to his time, his powers of agelessness come as a result of his time spent in the iroko tree.

ARE SOME OF THEM BASED ON REAL LIFE PEOPLE YOU HAVE INTERACTED WITH?
Not really, but they are based on some occurrences and incidents. 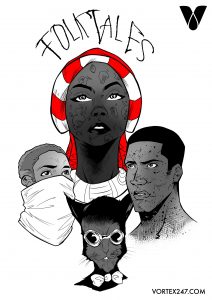 THEY ALSO SEEM TO HAVE DIFFERENT TEMPERAMENTS. WHAT IN YOUR VIEW MAKES THEM SUCH A GREAT TEAM?

For me I think they complement each other, and bring out the best in each other. They’ve spent time together and each of them also had a life before they met each other. It’s just them against the world.

THERE ARE QUITE A NUMBER OF CHARACTERS IN THE STORY. HOW DO YOU GO ABOUT BALANCING THEM, AND IS IT DIFFICULT MAINTAINING SUCH AN ENSEMBLE?

Sometimes it feels difficult, but the more you write, the more the characters begin to become real, and make decisions that real people would make if found in a similar situation.  Essentially the characters begin to speak to you, about their decisions, at this point the story begins to write its self. If you’re Familiar with all of them, there’s always a balance, because they all have a common goal.

WAS THERE ANY PARTICULAR CHALLENGE YOU HAD IN PENNING FOLKTALES?

I would say continuity, because if you leave the story for a little while, you may lose track of it especially if you’ve come a long way on it.

There are two I’m working on at the moment. At Vortex comics were working on a lot of cool stuff for readers all over the world. One is set in space, another is about a cosmic.

K.K. Ameyo often visits mythical lands, make merry with fictional people and come back to Earth to write their fantastical tales on his blog (A DYING FLAME).  As a writer, he hopes to influence readers to think about the things that influence their lives by having them question everything around them. He also hopes that someone somewhere will pick up the creative writing bug from his work.