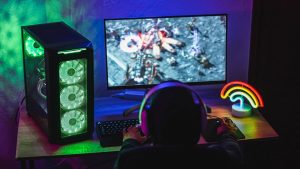 The age of the pandemic saw a steady growth in the global e-sports sector with market share increasing as much as $151 Billion USD according to AllAfrica.com. This was due to the fact that most people were locked in at home with pretty much nothing better to do but stare at screens. This couldn’t be truer for the Kenyan gaming scene whose primary demographic is 13-35 year olds had a market share of $100 Million USD in 2019 and grew to $126 Million USD as of January 2021. Statista.org estimates that the market share will grow to $153 Million USD by 2023. E-sports is the competitive play of video games as a commercial spectator sport.

Prior to the pandemic-induced gaming craze there were the elite game makers – innovators and players who dedicated hundreds of hours, investing thousands of dollars to refine their art and craft, all for the love of the game. To these people gaming isn’t just killing time; gaming is a way of life, a means to an end and a source of refuge for their harsh reality. Amongst this top class of e-sports devotees are Brian “Beast” Diang’a, Fredrick Renja Ocham and the eponymous Sylvia “Queen Arrow” Gathoni. 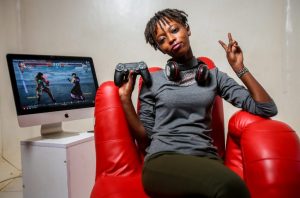 All hail the queen. It would be a huge mistake to ignore this top class female making airwaves in the male dominated sector. 22 year old Slyvia Gathoni who lives and breathes gaming besides studying law. Going by the gamer tag Queen Arrow, Sylvia boasts of being the first Kenyan to be signed by a major eSport company, Xit Woundz, based on the US reports Gadgets-Africa.com.

The self-proclaimed “Queen Arrow” broke onto the e-sports scene in 2017 upon joining college. She sky rocketed to fame due to her relentless efforts in the 2019 Safaricom Blaze E-sport Tekken tournament. Currently ranked 13th on the Tekken 254 tournament in Kenya, she is the only female on a male dominated pro gaming circuit.

Having been introduced to gaming at an early age by her older brother, Gathoni used to play classic games such as Super Mario and Contra before venturing into the world of fight games such as Tekken 5. According to AllAfrica.com Gathoni has invested thousands of dollars in acquiring state of the art gaming equipment to keep up with other competitors in the pro gaming circuit.  Some might wonder: how this is possible for a college student?  Well, Gathoni has loads of sponsors and partnerships that provide financial aid which allows her to keep up with advancing gaming technology.

Gathoni also disusses the challenges she has faced as a woman in the e-sports sector. In an interview with CNN Gathoni states that “ome people feel like the opportunities I have gotten are due to my gender and not my hard work and passion and talent. But, as they say, the best revenge is success. You just focus on your goals and you continue pushing.”

Besides streaming her Tekken 7 matches on the streaming platform Twitch, Gathoni is a law student at the Catholic University of Eastern Africa. Using her experience in the gaming field and knowledge gained from her studies, Gathoni is an advocate for women in the pro gaming circuit and combat sexism. 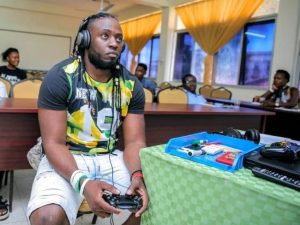 Brian earned the moniker “Beast” through his gaming prowess, where he is one of the best Mortal Kombat players in Kenya. Mortal Kombat is an arcade fight game where players compete against each other or challenge the computer. Talking to CNN Brian spoke of how he was born and raised in the poverty stricken slums of Kibera, where as a child he would go for days without food or water. He would however find room to escape his dark gloomy reality through one of the local gaming dens called the After Homework. “Gaming saved me from a life of crime” professes Diang’a.

Upon stumbling on his newfound talent, Diang’a could not afford fancy gaming consoles and would compensate by playing on classic hand held Nintendo consoles, whilst watching videos of players on YouTube to hone his skills.  In 2014, he made a pivotal decision to participate in local Mortal Kombat tournaments, which led multiple successes in the pro gaming circuit thus earning Diang’a the nickname “Beast”.

With his profound success as a professional gamer, Diang’a would grow to become a game mentor at the prestigious Safaricom’s BLAZE BYOB Summit reports CNN. “Beast” plays a key role in the development of e-sports in Kenyan slums. Diang’a is not only an avid gamer but a promoter as well, running several gaming dens for teens in the slums, availing e-sports to those who cannot afford gaming consoles.  “Currently I work with Pro Series Gaming and every week we host tournaments for different platforms — mobile, PC, and console,” adding that as many as 50 players will now register for those events” Diang’a says. 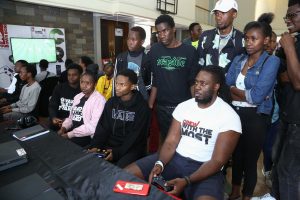 When this man gets his hands on the console he is relentless and shows no mercy, as he literally makes a living off gaming. Pro gamer Frederick Renja Ocham earned himself the moniker “The Virtual Football Boss” through his gaming skills in the football game, FIFA.  Ocham pays for rentals using gaming earnings with extra change for groceries and other necessities.

AllAfrica.com reports that the FIFA virtual football game, which has an 8 man team competition, can earn competitors as much as €500 a month. The obvious catch being that teams have to maintain a winning streak.  Ocham is a regular on the FIFA scene, and is a boss at world tournament level in the real time FIFA game series.

To compete at world tournament level is no easy feat as it requires rigorous hours of training and game time. Ocham spends roughly 4 hours a day playing on weekdays and 8 hours a day on weekends. The rest of the time Ocham spends indulging his creative mind and focusing on his day job as a creative writer.

Ocham doesn’t just play FIFA, his other favorite games include the arcade game Tekken and Leagues of Legends.  “Tekken is one of the most balanced fighting games I know. Unlike Mortal Kombat, every fighter feels like he has a chance to win,” he says.  Ocham encourages players who want to make a living on the e-sports scene to play games like FIFA and Call of Duty as they have bigger prize pools due to the large number of participants.

E-sports, while widely considered a redundant and hedonistic luxury activity, are fast becoming more than just means of leisure, but a powerful income generating tool with room for exponential growth within Kenyan society. E-sports is also becoming a social tool: subtly regulating crime on the street, since gamers spend most of their time on their consoles, rather than indulge in criminal activity. Other African nations who are fast embracing the e-sports sector include South Africa and Egypt.

Fidel Mpofu is a VORTEX Editorial writer. He is also a creative writer and amateur video editor based in Zimbabwe.  He’s currently studying for a Bachelor of Arts Honours Degree in Film and Theatre Studies.