Everything You Need to Know About “The Witcher: Nightmare of The Wolf” – An Early Netflix Review 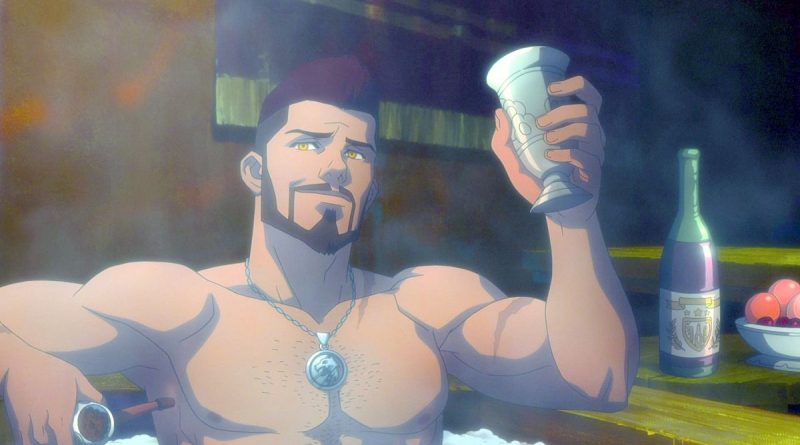 Netflix proudly presents The Witcher: Night mare of The Wolf!  Is it really a nightmare?  Well, not entirely.  A spectacular feast for the eyes? Absolutely!  Forget Geralt of Rivia, its Vesemir’s turn to shine. For those not entirely familiar with the Witcher lore, Vesemir is a supporting character in The Witcher franchise.  A prickly, off-putting senior citizen who is well versed in the Witcher ways and mentor to Geralt.  But in this anime feature he is so much more!

For those unfamiliar with the Witcher lore, Nightmare of the Wolf is a prequel/spin off anime feature based on The Witcher Saga, a dark fantasy collection of 15 short stories and 6 novels by Polish writer Andrzej Sapkowski. Originally written in Polish in the 1980s the saga was then translated into 37 languages over the years, developing a cult following, which prompted a video game adaptation which has sold over 50 million copies as of 2020 and a live action series currently streaming on Netflix.

The Witcher: Night mare of The Wolf is a 2D anime giving us an entirely new and up-close take on Vesemir, voiced by Theo James. One might recognize this talent from Netflix’s other epic animation, Castelavania and the live action Divergent trilogy.  Vesemir is a swashbuckling young Witcher who escaped a life of poverty to slay monsters for coin. But when a strange new monster begins terrorizing a politically-fraught kingdom, Vesemir finds himself embarking on a frightening adventure that forces him to confront the demons of his past.  That’s the story in a nut shell.

The adult anime opens in a typical dark fantasy fashion — a carriage in the woods accompanied by an ominous ballad from an on-screen character.  We are served an early dose of carnage as a creature decimates the occupants of the carriage.  Slaughtering them by the lot in an emphatic attempt to create sheer delight from all the terror and panic.  This marks the beginning of a recurring element in the film: blood and gore in fluid sequences, which anime fans and admirers of the gothic sublime will find delightfully pleasing.

But where there’s a monster you can be certain there is a Witcher close by.  “Monsters to hunt monsters” as Vesemir so eloquently puts it.  The Witchers are alchemical mutants created by the mages to hunt the scum that plagues mankind.

The Witcher emerges victorious in his fight against the creature. However, because he didn’t ‘humble’ himself before the nobleman whom he saves and strips jewellery from the noble corpses inflict cracks on the already brittle relations between the Witcher creed at Kae Morhen and the kingdom’s people at Kaedwen.  It does seem to be an odd reception for the heroic monster slayers until it’s revealed that Witchers aren’t so heroic at all. They are a creed driven by hubris and avarice, stooping to scamming the poor village folk for the love of coin.

These relations between Kae Morhen and Kaedwen crack further with the appearance of newly hybrid monsters that threaten to overrun the kingdom. We are treated to some backstory about Vesemir and how he was enticed to become a Witcher.  A role which he grew to embody under the mentorship of Deglan, voiced by Graham McTavish. In his quest to become a Witcher, young Vesemir leaves behind his beloved, Illyana, in hopes of one day returning with riches. 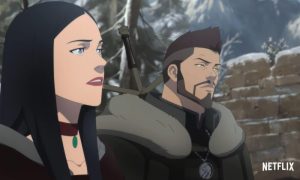 Suddenly, adversary is introduced into the fold.  Madam Tetra Gilcrest, voiced by Award winning actress Lara Pulver, is a mage in the king’s court and leads the hostilities against the Witchers.  Pulver is most notable for her role as Irene Adler in the British television adaptation, Sherlock. And as a member of the creed which created the Witchers, Tetra’s disdain of the mutants is somewhat unsound.  A point which is raised by other characters several times.

The antagonist faces an unexpected obstacle that comes in the form of Lady Zerbst, a steady cool headed lady of the court who acts as the voice of reason. Lady Zerbst advocates for coexistence between Kae Morhen and Kaedwen.  As all out war would lead to unnecessary bloodshed.

It is at Lady Zerbst’s behest that finds the Witcher and mage paired up to investigate and eliminate the new, hybrid threat.  During their solitude in the wild we receive insight into Tetra’s hatred of Witchers.  And of course, the two most powerful characters in the film treats us to some visually stunning action sequences.

The duo come across some damning Information that shake the foundation of their world, and threaten their newfound alliance.  With this discovery, we take a dive into Vesemir’s psyche — his humanitarianism is hidden underneath his greedy, fool hardy demeanour.

It is made abundantly clear that humans cannot co-exist with other creatures.  They led violent purges against the Elves and dwarves, driving both species to near extinction!  And evidently, their next target are the Witchers.  And an all out war breaks out between witches and humans led by none other than Tetra.  Vesemir might be the star of the film but Lady Zerbst is undoubtedly the heart of the film with an outstanding performance by seasoned actress Mary McDonnell who voices the character. Lady Zerbst is perhaps the most well written character in the feature with layers to her personality and traits.  She is soft, yet firm when necessary.  McDonnell is a multiple award winning actress, boasting an Obie Award and a Saturn Award, two Academy Award nominations, two Golden Globe Awards, and two Primetime Emmy Awards.

The  film is produced by the Korean animation company, Studio Mir which brought us classics such as DC’s The Death of Superman, The Legend of Korra and Netflix’s Dota Dragon’s Blood. With excellent directorial talent from Han Kwang Il known for his directorial and lead art department credits in The Boondocks, and Voltron: Legendary Defender. Lead character designer Lee Dae Woo and his team bring expertly detailed designed.  The film’s epic music is composed and performed by Brian D’Oliveira.  Some of his most notable work include scores for League of Legends 2020 and Resident Evil: Biohazard.

The feature is produced by The Witcher’s live action show runner and executive producer Lauren Schmidt Hissrich who has had an in a stream of Netflix shows which include Umbrella Academy, and The Defenders and Power.  On-board as the co producer and writer is Beau Demayo whose filmography Includes The Originals and the live action Witcher series.

The Witcher: Night mare of The Wolf premiers on Netflix on August 23rd.   It is rated TV-MA due to its mature themes, explicit content, language and graphic violence not suitable for viewers below the age of 18.